The entire territory of Lembeke was sandy moorland with a high ridge cutting accross.  Centuries later they would build the Antwerp Highway on this ridge and this highway would run from Oosteeklo to Eeklo.

The name Lembeke was first mentioned in 1225.  It means either "River by the lime-tree" or "River in loamy bed".  Lembeke's first church was undoubtedly built between 1200 and 1240, like those of Kaprijke, Eeklo and Oosteeklo.  It has a unique early Gothic "west tower".

In 1240 Lembeke and Eeklo received a charter from the Flemish duchess Johanna of Constantinopel and her husband Thomas of Savoie.  The prerogatives listed in this charter were meant to attract settlers to this region.  And until 1626 Eeklo and Lembeke formed together a privileged seigniory in the Freedom of Bruges ("Brugse Vrije") which was governed directly by the Earl of Flanders. In 1270 Lembeke had 3 aldermen while Eeklo had six.

The "Little Kaprijke Canal" (Kaprijks Vaardeken) was an important waterway in the Middle Ages.  It cut across Lembeke from north to south.  It linked Kaprijke via the Burggravenstroom (Viscounts' River) with Ghent.  Kaprijke even now has a "Vaartstraat", Canal Street.  And in the forests there is a place called "Droog Vaardeken" (Little Dry Canal) where the canal silted up.  There was also a connection with Waarschoot and Eeklo called the "Zoutweg", Saltway.  The name refers to the salt making industry in the moors.

The cloth industry was very important for the survival of Lembeke (and Kaprijke) in the 15th and 16th Century.

But it and so much else was swept away with the Religious Troubles.  The church was badly damaged.  Marten Hauweel, lord of Aveschoot, humanist, poet and friend of Orange was exiled.

In 1626 Philip IV, the king of Spain, let the Seigneury of Lembeke to Jan Stalins and this is how it came to be separated from Eeklo.  In 1642 the Seigneury came into the possession of Louis van der Haegen and finally it was the property of Jozef-Clemens Keingiaert.  In 1750 it was sold to Louis van den Hecke, an arboriculturist and landowner.  In 1772 Louis-Bernard van den Hecke became the last lord of Lembeke.  He also became mayor of Ghent but with the passing of the Ancien Regime he lost everything.

The job of repairing the damage after the Religious Troubles lasted from 1613 till 1623.  Except for the 13th Century west tower the church was completely rebuilt in 1776.  The result is a typical example of a neoclassical church of that time.

The Aveschoot Chateau is a typical example of a chateau site surrounded by a moat.  The history of this domain goes back to the Middle Ages when it was the abode of the Lords of Aveschoot.  On the site we can now admire the chateau dating from the 18th Century, the 16th Century pigeon tower, the former castle farm with the 18th Century farmer's house, the coach house, the former horse stabling, the servants' quarters and a monumental drive lined with oak trees.  The actual chateau was built in 1785 by the Schamp family in Louis XVI style on the spot where the old chateau stood.  It is a very good example of classicistic architecture.

The source for most of the above: "Streekgids Meetjesland", pp. 64-66 by Walter Notteboom. 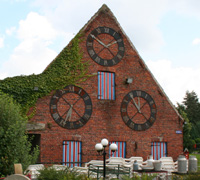 And let's not forget the great Bardelaere Museum.

And finally here is a tribute to the forests of Lembeke: the air in Lembeke has rushed through these—shall we say sacred woods, investing them with freshness.  It is this Fourth Element, the purest of air combined with other elements that give Lembeke its smooth, light, delicate and refreshing taste.  (If you have read something similar somewhere else, perhaps you are a real connoisseur of one of life's—Scotland's—truly great luxuries.*)